Those that headed up the Bruce and launched at ports to our north last weekend scored well on the reefies. A few “tarp shots” are doing the rounds, of bag limits of coral trout and red throat, amongst a mix of other reef dwellers such as red emperor, tuskies, moses perch, hussar and various cod.

Some crews ventured wider, found the snapper and pearlies a little hard to avoid altogether, but picked up a mixed bag of deeper water reefies including bigger reds and tuskies, along with a few members of the jobfish clan.

Those that didn’t get the opportunity last weekend could sneak an overnighter in on the GBR Saturday. Anyone that went last weekend shouldn’t need to bother as they should be feasting well for some time to come. The extra tidal flow and dark moon should see a vigorous bite from the reds.

Launching locally and heading offshore will be an option for crews with larger vessels. The wind should drop out tomorrow afternoon and not kick in again until late Sunday. The tides and moon are great, there will be minimal swell and sunny skies, so you can pretty much tick all the boxes if the boat is ready and a leave pass organised. 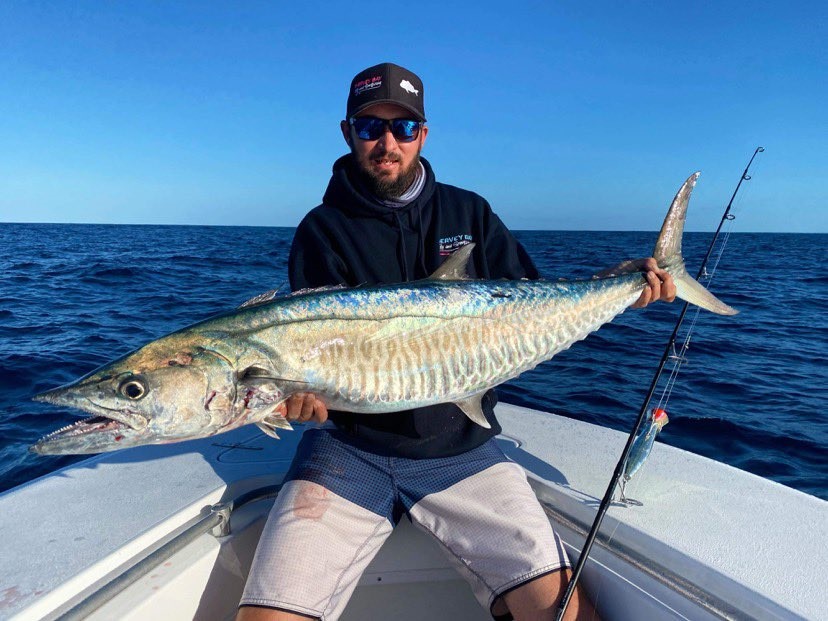 Andrew from Hervey Bay Fly & Sportfishing with a solid spanish mackerel caught on a popper.

Don’t forget the snapper and pearl perch closure if heading over the bars either north or south of Fraser. Both species will be hard to avoid down south in particular, whilst the greater variety of reef species over the Breaksea Spit can offer plenty of tasty targets if you plan your assault appropriately.
It is probably a good idea to avoid the 100m line on the shelf, as this is where the largest biomass of both snapper and pearlies are congregated, along with stupid numbers of sharks just waiting for you to hook up. Fish the shoal country instead and drift various grounds looking for reds, red throat, green jobbies, tuskies, coronation trout, maori cod, hussar and the like and you should score a great mixed bag. The sharks will be an issue for many over the shoals too, so be mobile as always.

Keep an eye on the sounder for large schools of yakkas offshore. Not only will the presence of these baitfish excite the resident bottom dwellers in the area, but larger pelagics such as cobia, spanish mackerel, GTs and marlin can also home in on the action. Have a stickbait rod rigged and ready if you are into a bit of heavy duty topwater action and work the bait schools if found in roughly 15-35 metres over shoaly country.

There are small black marlin roaming our wider grounds even now, with a few working bait schools down along the east coast of Fraser and random billies turning up out in the northern bay. Just recently, a regular customer saw a single flying fish take off nearby whilst fishing north of the Gutters only to be connected to a feisty little black marlin moments later when it scoffed a pilchard being retrieved from below.

All skippers and crew should be extra vigilant over coming months as our humpback whales are migrating through the area in bigger numbers than ever. Traveling at night is particularly precarious, and possibly even riskier on the dark moon, but something we locals have become accustomed to over the years. Don’t think the whales are only an issue out wide or up the bay either, as every year a few roam off course and turn up just off our local foreshores and even down the Great Sandy Straits.