The weather Gods blessed us this year with an unprecedented three days of great weather. Following Saturday morning’s shotgun start 15 boats headed out to various spots in Albatross Bay. with action starting early;  the first marlin and sailfish tagged half an hour into  fishing. The hot action continued for most of the day with most boats hooking fish. The stats for day one ended up at 29 tagged billfish. “Who’s your Daddy” leading with five tags and “Stoned Cold” not far behind on four and several boats on three. As with our past tournaments most boats chose to stay in Boyd’s Bay for the duration of the tournament as it is close to the grounds and everyone can raft up to discuss the day’s events.

Day two started a little slower. Most boats started out in Saturday’s hot area five miles off the coast in 24 metres of water. The fleet spread out over the course of the morning and fish were found on the southern grounds that had produced good numbers earlier in the year. At the end of day two the lead hadn’t changed, with “Who’s your Daddy” streaking ahead with a further four tags. Second and third became hotly contested though with “Get n Any” finding fish down south and finishing the day on four tags. “Stoned Cold” added one more to their tally and a number of boats were still in the mix on three. It was party night in Boyd’s Bay Sunday night on the houseboat and barge supplied by Weipa Houseboats where a BBQ and beers were put on by the Club.

Day three was very slow with a few sore heads and low numbers of fish raised. Once again the southern grounds seemed to be consistent with most boats fishing that area seeing fish. The afternoon saw a few boats troll towards home where a couple of fish were found around the 20 metre FAD area. At cease fishing “Who’s your Daddy” had cemented their lead by adding another sail, “Get n Any” pipped “Stoned Cold” for second by tagging another two fish. Special mention goes to lady angler Kara Braes who fought an estimated 350lb black marlin for 4 hours on 10kg line before unfortunately losing it.

The end results were 49 fish tagged for the tournament (41 sailfish and eight black marlin) among 15 teams and 42 anglers. 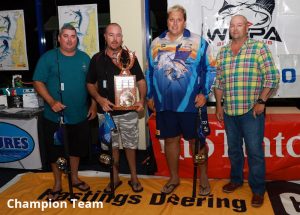 Runner up Boat: Get n Any