Looking Great for those Pursuing Marlin this week

This season’s inshore black marlin season has been slow to get going, partially due to diminished opportunity and effort due to the stormy weather and stiff northerly winds in recent weeks. The capture of a couple of small blacks off Rooneys in recent days is certainly encouraging, and augers will for those keen to give them a crack during the spell of better weather on its way next week.

The approach of next Friday’s new moon substantially improves your chances as well, so things are looking great for those with smaller vessels looking to tangle with a Hervey Bay black. Simply gear up with a decent set of teasers, a good selection of small pushers and have a spin outfit or two at the ready to pitch baits or lures to free-swimming fish. Slip a few large yakkas into your live bait tank as well, and toss them in the direction of any roaming little black and your drag will soon be screaming.

A quick word of warning for budding inshore marlin hopefuls. Beware of the sharks. The past couple of years has tragically seen far too many of these majestic little creatures destroyed by sharks attacking them mid-fight. Indeed, a few regulars will try to manoeuvre the fish up into the shallows during the fight to avoid contact with noahs (though this is easier said than done, that is for sure). 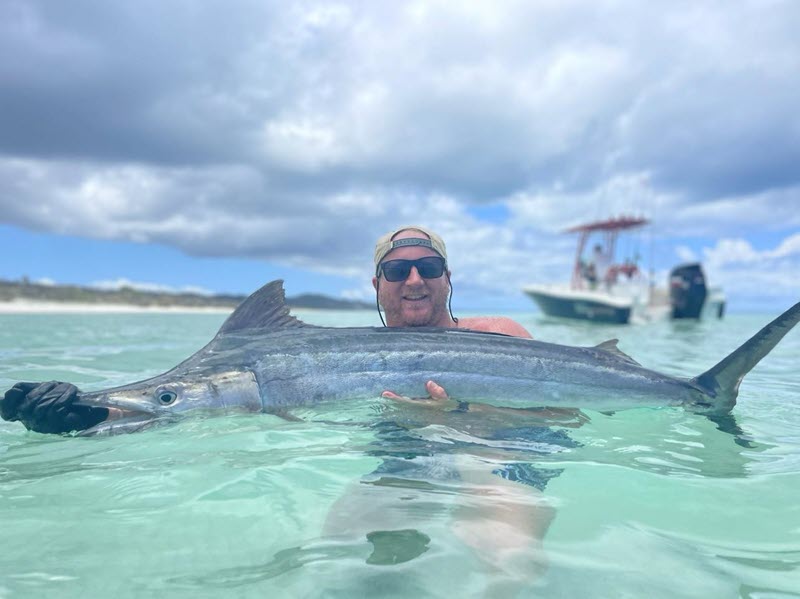 Owen with a nice juvenile black caught in the shallows.

Also, be very wary when handling the fish boat-side for the same reason, and also please limit the time a fish is held out of the water for happy snaps. Far too many fish die and sink to the bottom due to poor, or over-zealous handling, which is easily avoided by simply being prepared and having a camera/phone at the ready. Catching a marlin in the shallows and jumping in with it without removing it from the water for a happy snap is as cool as it gets with the bay’s baby blacks. Catching one out wider, then hoisting it into the boat to drive to the beach and pose in the water with it is very uncool.

For those with offshore-capable vessels, next week looks even more exciting. Again, weather constraints have restricted offshore activity recently. Back closer to the full moon, a Gold Coast boat had a ball out off the northern tip of Fraser, boating 5 from 6 little blacks on light tackle not far off Breaksea Spit, before heading out to the shelf and going 7 from 8 on heavy tackle. Pretty impressive numbers, particularly for the full moon, so imagine the potential over the coming new moon.

Word is that there has been acres and acres of small skipjack tuna and stacks of birds working the bait schools along the shelf line off the northern tip of Fraser. Check BOM’s seas surface temperature charts and you will soon see the significant spur of hot current pushing its way down past Breaksea Spit to the waters offshore of Fraser.

The leading front of this finger of current will concentrate the greatest biomass of baitfish and pursuing predators. Depending upon the timing of your assault, this might see you working the grounds off the 13 Mile early, the 4 Mile thereafter or even south of the cape some days/weeks later.

Large blue marlin are the most common of the larger billfish encountered out wide off Fraser/Breaksea, with big striped marlin also quite common. The big blacks also frequent these waters, but can be the trickier of the three to find some seasons. Billfish grand slams, consisting of captures of blue, black and striped marlin are recorded each year from these waters, sometimes by a few boats.

It is not just the billfish that will be feasting in the bait-rich warm currents offshore this time of year, with big mahi mahi quite common bycatch on the heavy tackle gear out wide. Yellowfin tuna are also a possibility, turning up in varying numbers each year. The fact the wind will swing onshore next week should help to further enhance the predatory activity in the aforementioned hot currents, as the wind pushes and holds the current and its fish closer to the coast.

So, get your offshore rig ready, gear up, watch the weather and current and pounce on the next available opportunity to head wide chasing billies. A typical day offshore of Breaksea or Fraser will see you crossing the bar at first light, then deploying the light gear close to the bar or island until about mid-morning, before heading for the shelf and getting the heavy tackle out for the afternoon session.