Juniors Hooked Up in Townsville 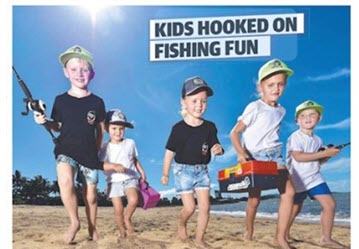 GREAT FUN: William Travers, 8, Matilda Beetham, 5, Jackson Travers, 6, Jordyn Beetham, 7, and Maci Beetham, 3, from the Townsville Game Fishing Club, which has been praised for its great work with juniors.

Greater focus on the future has paid big dividends for the Townsville Game Fishing Club, with an invigorated membership base powering them forward. Over the last 18 months the club has focused more resources on its juniors and it is reaping the results. This weekend the club will hold its second annual kids fishing tournament, the Sharkies Shootout, which had a capacity field almost instantly.
“The first year was so popular it’s become part of our annual calendar,” member Nikki Beetham said.
“The last few years there’s been more children involved in the sport so we’re trying to make the most of it and giving them their own event.
“It’s just a really fun weekend. We capped it at 60 juniors and it was maxed out nearly straight away.”

Beetham said children who had been involved last year spread the word about the event, which led to more families calling up wanting to be involved in the club.
“We’re not just a fishing club, we also go camping and do outdoor activities.”

The club has been recognised nationally for its work with youngsters, with the sport’s governing body and Bluewater Magazine praising their efforts.
Beetham said it was rewarding to see the fruits of the club’s hard work.

The Sharkies Shootout event will be held this Saturday at Rollingstone.